With $100,000 in Support of Mentorship Programs

DALLAS (June 15, 2022) – 100 Black Men of America Inc. and Raising Cane’s Chicken Fingers are joining forces to grow their partnership. Today, 100 Black Men of America – recognized as the nation’s top African American-led mentoring organization – accepted a $100,000 donation from Raising Cane’s in conjunction with their 36th Annual Conference and Juneteenth Independence Day. The donation will go toward the organization’s signature programs and local chapters, such as mentoring, economic empowerment and Collegiate 100®.

“We’ve been working with 100 Black Men of America locally for more than five years now, and we’re proud to support their great work in education, mentorship and helping to grow the next generation of leaders in our communities,” said Raising Cane’s Founder and CEO Todd Graves. “We are excited to take our partnership to the national level and help impact young lives across the country and beyond.”

Raising Cane’s has supported the local chapter of 100 Black Men of America in its hometown of Baton Rouge since 2017, and in 2019 pledged $100,000 to help advance the organization’s mentoring, education, health and wellness and economic empowerment efforts. Raising Cane’s is an official partner of the 100 Black Men of Baton Rouge’s entrepreneurship program and supports its ongoing efforts and programs throughout the year. Today’s $100,000 donation to the national organization is in addition to the $100,000 pledged in 2019 to the Baton Rouge chapter.

“Partnerships like ours with Raising Cane’s are a cornerstone of how our organization is the leading African American-led mentorship program in the country,” said 100 Black Men of America Mid-South District Director Michael W. Victorian. “In addition to benefiting mentorship, this donation will also help support our campus-based program, The Collegiate 100, as well as economic empowerment initiatives. This announcement has added to the excitement of 36th Annual Conference kicking off today in Hollywood, Florida.”

ABOUT 100 BLACK MEN OF AMERICA, INC.: 100 Black Men was founded as an organization in New York City in 1963. The national organization, 100 Black Men of America, Inc. began with nine chapters in 1986 as a national alliance of leading African American men of business, public affairs and government with a mission to improve the quality of life for African Americans, particularly African American youth. These visionaries included businessmen and industry leaders such as David Dinkins, Robert Mangum, Dr. William Hayling, Nathaniel Goldston III, Livingston Wingate Andrew Hatcher, and Jackie Robinson. Since inception, the vision emerged and grew to over 10,000 volunteer members impacting over 125,000 underserved, underrepresented minority youth annually. Visit www.100blackmen.org for more information on the programs and initiatives of 100 Black Men of America, Inc. and their global network of chapters.

ABOUT RAISING CANE’S®: Raising Cane’s is the nation’s fastest-growing chicken finger concept, rapidly approaching 700 restaurants in over 35 states and Guam as it opens 100 new Restaurants across 10 new markets in 2022.  The company has ONE LOVE® – craveable chicken finger meals – which includes the iconic “Cane’s Sauce” – named the #1 sauce in the quick-service industry. Raising Cane’s is consistently recognized for being a great place to work – most recently earning them a spot on Glassdoor’s ”Best Places to Work” list, and Forbes’ “America’s Best Large Employers” list. Raising Cane’s was also recently recognized in the inaugural Forbes Halo 100 for excellence in delivering customer satisfaction and brand trust. More information is available at raisingcanes.com. 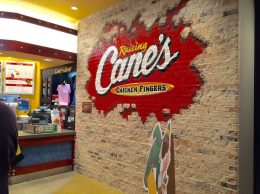 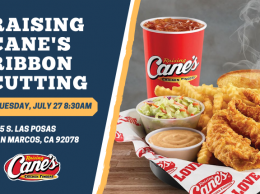