Warning: A non-numeric value encountered in /home/customer/www/thevistapress.com/public_html/wp-content/themes/dailypress/include/breadcrumbs.php on line 54
Calendar >   Scripps Ranch Theatre -Out on a Limb – New Plays from America’s Finest City

Scripps Ranch Theatre, located on the campus of Alliant International University, presents their 6th Annual Out on a Limb – New Plays from America’s Finest City. Scripps Ranch Theatre is a leader in the Southern California Arts Community in developing and producing new plays. The pieces are all new, world-premiere plays written by area playwrights, and have a common theme of having something to do with San Diego. This year, the festival will run  July 21-23, Fridays and Saturdays at 8 pm, Sundays at 2 pm.

Founder and Artistic Director of the Festival, Robert May shared “We are excited to be gearing up for our 6th Annual Out On A Limb. At Scripps Ranch Theatre – we continue to look for ways to encourage development of new works from our diverse community that reflect the San Diego experience. This year we have an OOAL alum, Steven Oberman, and first-timers Joe Nogra and the writing trio of Diana Burbano, Tom Shelton, and Chris Shelton.  It’s hard to believe that it’s already been six years, but we’re so proud to once again support area playwrights with their new work and have them produced on our stage.”

LOOKING FOR MUSE, by Steven Oberman directed by Daren Scott  … Glen, a senior at UCSD, wants to graduate with honors, and is certain he has to find a girl to inspire him to achieve it. Sharon, a psych major who lacks self-awareness, is looking for someone to psychoanalyze. A match made in heaven? Or, are they looking for muses in all the wrong places? 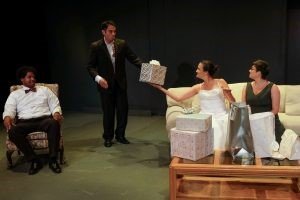 THE BOX, by Joe Nogra directed by Charles Peters … “Absolutely Do Not Open Until Your First Disagreement” reads the attached card on the gift from the bride’s eccentric aunt.  Though pressured from their bridal party, the newlyweds decide that this gift will remain wrapped until they’ve reached that point.  It survives countless milestones but do french fries, ranch dressing, and moving day threaten the opening of THE BOX? 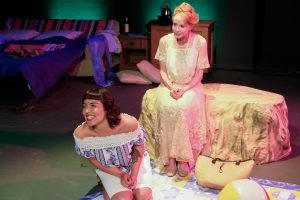 Is it a hallucination or merely a touch of magic realism that leads to the friendship between Marina Santiago — an oceanography student afraid of the sea — and Ellen Browning Scripps, the legendary philanthropist of La Jolla?  When an ill-fated one-night-stand sends Marina running into the flippers of a loquacious and free-spirited harbor seal — hallucinatory or not, it leads to an epic battle to save La Jolla’s soul and liberate Marina’s.

CREATIVE TEAM BIOS: … ROBERT MAY:  (Founder and Artistic Director:  Out on a Limb) Robert began working with new plays as an undergrad actor, as a director with the Fritz Blitz, and continues his passion for new work with New Works Studio and Out on a Limb – both at Scripps Ranch Theatre.  He is an actor and sound designer, and an award-winning director.

TOM SHELTON (Co-Playwright, The Strange Education of Marina Santiago-Scripps). As an actor: South Coast Repertory, Pasadena Playhouse, Musical Theatre West, International City Theatre, La Mirada Theatre, and Laguna Playhouse. he was a company member of Los Angeles’ Hillside Repertory for 11 seasons. He appeared Off-Broadway in The Man Who Shot The Man Who Shot Jesse James. Mr. Shelton is on the faculty of SCR’s Adult Conservatory, and is an accomplished playwright and composer.  For Orange County’s Gourmet Detective he has co-authored several comic thrillers. His musical Caddie Woodlawn, adapted from the American classic, co-authored with Susan Hunter, is published by Samuel French.

JOE NOGRA (Playwright, The Box) is an aspiring San Diego playwright and actor. He is humbled and honored that his one act play, The Box, is being produced as part of SRT’s Out On A Limb 2017. Select recent work include short stories produced by Asian Story Theatre and his full length play; Perception – The Modern Day Love Story produced by the Mesa College Theatre Company. Stay tuned for upcoming scripts and read samples of his work at Storiesbyjoe.com.

CHARLES PETERS (Director, The Box) Charles is an award winning director and actor and has twice toured nationally. In San Diego he has worked professionally as a director, actor, sound designer, and consultant at ion theatre, New Village Arts, Scripps Ranch Theatre, OnStage Playhouse, Coronado Playhouse, Cygnet Theatre, Carlsbad Playreaders and more. He currently serves on the Board of Directors at Scripps Ranch Theatre and as their OutReach Director. For further information visit www.charles-peters.com

STEVEN OBERMAN (Playwright, Looking for Muse)  Steven’s plays have been produced in California, Texas and Ohio. His one-acts Leaving Shadows and A Slip From Reality had their premiere productions at Scripps Ranch Theatre’s Out on a Limb New Play Program. They have also toured San Diego schools as part of Scripps’ Outreach Program, as well as being presented together as Leaving Reality for this year’s San Diego Fringe Festival. Oberman received the First Place Award for his one-act, Forgive Me Not, from Scripteasers’ Short Play competition. Other produced plays include Vanished, Mozu, a musical, and Claire Voyant. Steven is a proud member of the Dramatists Guild of America.

DAREN SCOTT (Director, Looking for Muse) Directing credits of note, The Miss Firecracker Contest (Critics Circle Nomination for Sam Ginn as best lead actress), Of Mice And Men (Critics Circle Nominations for Best Production, Best Director and a win for best lead actor Manny Fernandez) both at New Village Arts. Here at Scripps Ranch Theatre he directed the critically acclaimed An Inspector Calls. He is thrilled to be directing Joshua Jones and Denae Steele in Looking For Muse by Steven Oberman.

Scripps Ranch Theatre is located on the campus of Alliant International University. Out On A Limb: New Plays From America’s Finest City runs from July 14th – 23rd, Fridays and Saturdays at 8pm, Sundays at 2pm. To reserve best seats now, contact the box office at 858-578-7728. www.Scrippsranchtheatre.org Individual tickets are $20. 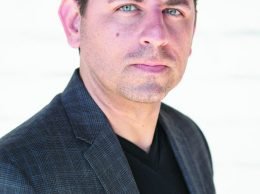 Scripps Ranch Theatre (SRT) Presents OUT ON A LIMB