TR Robertson …There’s murder, and laughter in the air at Scripps Ranch Theatre with the current presentation of “Flemming, (An American Thriller)”. Sam Bobrick’s play was written as a parody of film noir thrillers from the 1940’s to 1950’s. All of the action of the play takes place in the living room of the suburban Westport, Connecticut home of Karen and Henry Flemming. Karen and Henry have led an uneventful life up to this point, but that will soon change with a series of bizarre, unexplained circumstances.

Under the direction of Robert May, Production Manager Christine Hewitt, Scenic Designer Bob Shuttleworth and Costume Designer Dawn Fuller-Korinek the dark comedy takes on ominous feelings before the first actor or actress walks on the stage. The Flemming’s living room fits the perfect description of a film noir set – filled with nothing but black, grey and white furniture, drapes, pictures, fireplace, doors, wallpaper. In fact, the only color in the room that can be seen is on the bar with a multitude of liquors, which will play an ongoing part throughout the play. 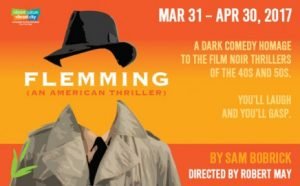 Henry Flemming, played by Cris O’Bryon, wearing a black suit, white shirt and black and grey striped tie, is bored to tears with his current brokerage profession, as he enters his home to announce to his wife Karen, played by Beth Gallagher, that he has sold his firm and purchased a detective agency, the Acme Plaza Detective Agency, where he plans on becoming a detective. He says he is tired of his dull, reliable life and wants to fulfill his fantasy of living an adventurous life. At this point we are introduced to Karen’s obsession of offering anyone and everyone a drink to help whatever the situation may be. The play will become a lesson in mixology. After turning down a martini, Henry takes a gin & tonic and then a bourbon and ginger ale. Cris O’Bryon is a veteran of numerous playhouses in San Diego and Beth Gallagher, also a local stage veteran, is making her Scripps Ranch Theatre debut.

In Scene 2 we are introduced to a most irritating couple, the Flemming’s neighbors, Stan and Suzy Spencer. Stan is perhaps the worst psychiatrist there is and wife Suzy is quick to point out any fault Stan has, much to Stan’s loud, boisterous objections. Stan is played by Walter Murray, a veteran of Scripps Ranch Theatre and Suzy played by Kristin Woodburn, also a SRT vet. Henry knocks at the door and enters somewhat beaten up, and the mystery begins. Karen seeks Stan’s help and the best he can offer is for Henry to get shock treatment. His biggest worry is whether or not Henry and Karen will be going to Acapulco with then. Henry just wants Stan to leave and keeps insisting he is not his friend. Scene 2 ends with us no closer to understanding what Henry is involved with for his first investigation, but he loves it. Karen makes sure everyone has their favorite drink in hand. 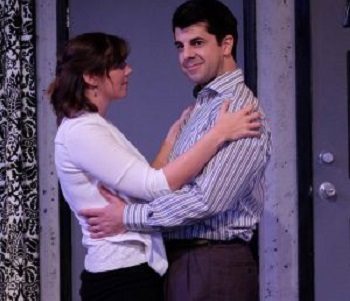 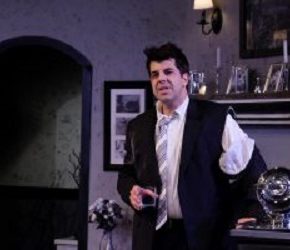 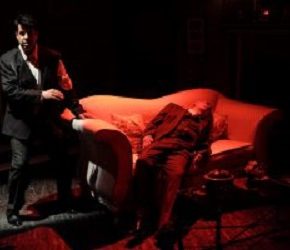 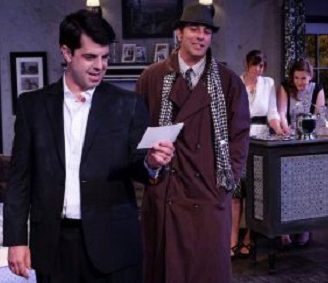 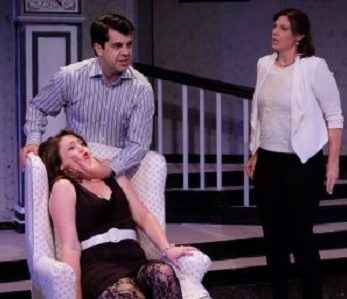 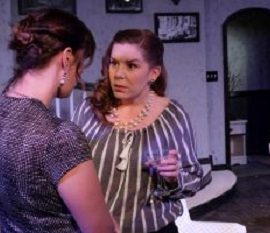 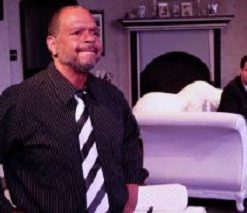 Scene 3 we meet Karen’s banker father, who she feels will straighten Henry out. Walter is played by 30 year San Diego veteran actor, Steve Schiam, who has also performed in New York, New Mexico, and Mexico. Another knock at the door and Walter finds Henry in worse shape than in Scene 2. Drinks are offered, Walter attempts to talk Henry out of becoming a detective and then a window breaks and Walter is shot and killed. The mystery deepens. Scene 4 finds Karen, Stan and Suzy returning from Walter’s funeral, minus Henry. More drinks are offered, another knock at the door, Henry is found in even worse shape and we hear about Mr. Peterson, who remains a mystery. Next we meet Lt. Davis, who is introduced as a police detective. Lt. Davis is played by Matthew Thompson, another San Diego County veteran of many productions. Henry announces he is headed to St. Louis, a door is opened and of course a body falls out, supposedly Mr. Peterson, end of Act II and we are still no closer to knowing what is going on.

Act II is full of more unusual drink orders, such as a Red Russian, a Vanilla Whammy, tequila sunrise and more. The body count continues to climb and we meet Vito Mardigian, a low level mobster, played by Daniel Gurian, and Miss Havenhurst, Henry’s sexy secretary, played by Michelle Marie Trester. Both will play a major roles at the conclusion of the play.  Daniel Gurian has been in other SRT productions as well as in NYC productions and Ms. Trester has performed in a variety of productions in San Diego County. We also see major changes in Henry, including an impressive Don Johnson Miami Vice appearance, and we also find out there is more to the Flemming home than we first saw. Without giving the ending away, let’s just say its complex, intertwined and not everyone makes it out alive. And, of course, drinks flow and Stan somehow survives it all with a surprise twist. Maybe Henry is right when he says, “In the pursuit of justice, many innocent lives are shattered forever”.

Sam Bobrick has written for the children’s show “Captain Kangaroo”, the “Andy Griffith Show”, “Bewitched”, “The Flintstones”, the “Smother’s Brothers Comedy Hour” and “Get Smart” and he won 3 Writers Guild of America Awards for T.V. writing and was nominated for an Emmy. He created “Saved by the Bell” and has written more than 30 plays. His first play, “Norman, Is That You?” ran on Broadway in the 1970’s and for 5 years in Paris. He also wrote 2 plays with his wife, Julie Stein, about controversial comedian Lenny Bruce and he won the Mystery Writers of America “Edgar” Award for his short story “The Psychic”.

This is a fun take on old murder mysteries with a modern twist. The play is over the top with a cast that presents their characters in humorous, clever ways. The play will run until April 30th on Fridays and Saturdays at 8 pm and on Sundays at 2 pm. Scripps Ranch Theatre is located at the Legler Benbough Theatre on the Alliant International University campus. Tickets can be obtained by calling 858-578-7728 or www.scrippsranchtheatre.org.