Warning: A non-numeric value encountered in /home/customer/www/thevistapress.com/public_html/wp-content/themes/dailypress/include/breadcrumbs.php on line 54
Calendar >  “The Life of a Sofa” Now on Stage at Vista’s Broadway Theater

TR Robertson -Vista Broadway Theater co-owner Randall Hickman had a clever idea for a play he was writing, perhaps partially based on the old axiom “If these walls could talk”, except the premise for his play was “If this sofa could talk”. In a series of nine quick scenes, running the emotional gamut from sad to hilarious, six talented actors and actresses portray 25 different characters all centering around a 1922 sofa that has been passed down, through a variety of ways, to different families or businesses and has witnessed numerous occurrences. We see quick glimpses of the interactions around the holiday season as the sofa becomes the center piece of memories. 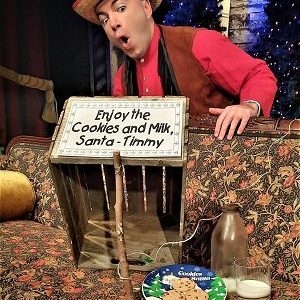 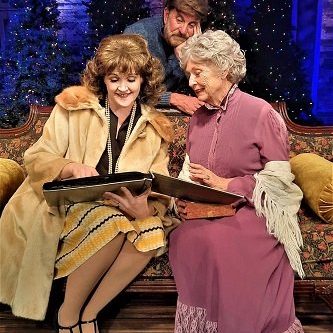 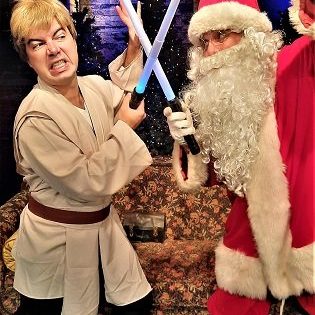 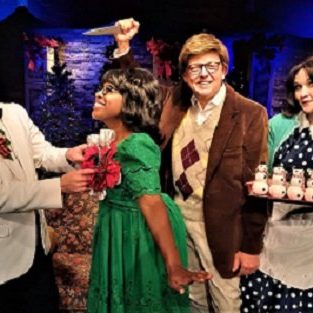 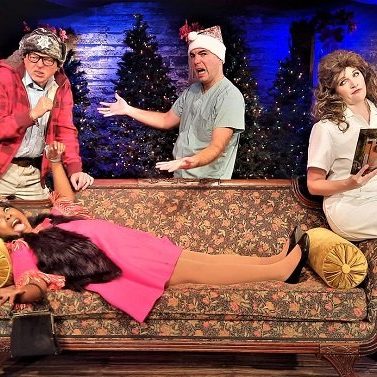 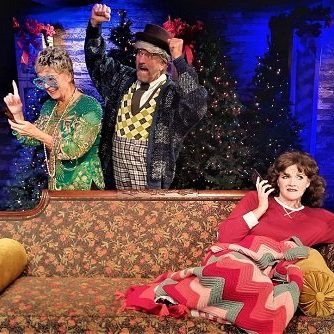 The first scene involves how the sofa became the possession of the original owner and the complications the sofa witnessed with the owners. We then see the sofa become the site of a “would be trap” to catch Santa by an impetuous boy. Later the sofa witnesses an overprotective father meeting his daughters date in a scene that resembles something Saturday Night Live would love. An emotional grandmother waiting on the sofa to see her grandson coming home from the war is next followed by a department store’s Santa’s encounter with an overwrought young Star Wars enthusiast as Santa is taking a break relaxing on the sofa. It becomes part of a waiting room piece as an expectant woman and an unusual security guard find there is “room at the Inn”. The sofa becomes the site of a pleasant surprise for a young woman’s back-up plan after her conversation with her grandmother. A hilarious semi-rendition of the “Night Before Christmas”, by Vista Broadway co-owner Douglas Davis, finds the sofa holding a plethora of medications as the lines of the poem suddenly find memories of a variety of aliments and medications from the Pharmacy the old gentleman takes as he recites the poem. Rousing applause followed this scene. The final journey the sofa takes is a continuation as one family member struggles with having to give the sofa up only to find it is going to an even better home.

The one hour fifteen-minute play was written and directed by Randall Hickman. Along with partner Douglas Davis, sets and props were constructed and obtained, sound and lighting designed, and the Broadway Theater was wonderfully decked out in the holiday spirit, including a small Boutique with Christmas gifts available for purchase. My wife purchased a pair of fuzzy slipper socks. Also available are tickets for purchase for the always fun filled Opportunity Drawing. All funds raised go to support the Vista Broadway Theater. We won a Santa Cookie Plate and chocolate peanut butter cookies this time.

The five actors and actresses joining Douglas Davis on stage are Kenneth Gray, Renetta Lloyd, Jacob Silva, Eliane Weidauer and Audrey Lee Young. All the performers come from a wide background in the theater both performing and several also directing productions. They showed a wide range of talent as the fast-paced play had them performing a variety of roles from young to older characters. There is even a surprise song from Randall Hickman you don’t want to miss. This is a fun, different take on the holiday season and well worth a visit to Downtown Historic Vista for lunch or dinner and the theater.

“Life of a Sofa” will be on the Vista Broadway Theater stage until December 18th. Shows are Wednesdays, Thursdays, Saturdays, and Sundays. Shows are at 7:30 pm Wed.-Sat. with 2 pm shows on Saturday and Sunday. The theater is located at 340 E. Broadway in Downtown Historic Vista. Tickets are $25.00 and can be purchased at 760-806-7905 or order online at www.broadwayvista.biz/order-tickets.html.

Also available for ticket purchase for December are two Christmas Cabarets. For one night only will be “A Mary, Merry Christmas Medley of Holiday Favorites” performed by recording artist Mary Jaeb. This show will be on December 9th at 7:30 pm. On December 16th and 18th at 7:30 pm will be “Gnome in the Home!” starring Jessica Hackenson in a one-woman Christmas Spectacular. Tickets available at 760-806-7905 or online at www.broadwayvista.biz/order-tickets.html.