“From the moment I finished reading Jez Butterworth’s “The Ferryman” I knew it would be the highlight of my 20+ year career to be able to direct the show,” said Kristianne Kurner, Founder and Executive Artistic Director. “I was immediately drawn in by the way it addresses the effect of violence in society through the lens of an epic family story. There is so much joy, laughter, romance and play amidst the stark realities of the North of Ireland in 1981.

I’ve spent my career focused on the work of the actor and I can’t imagine a better play and a better cast to bring that work to fruition. I’m also proud that we are bringing a diverse group of actors and designers together to tell this universal story. All of us at New Village Arts are honored to bring this incredible show to our community.”

The renaming comes as NVA’s Carlsbad Village facility has its theatre modernized and public space redesigned to be a cultural gathering space and arts center named for San Diego arts philanthropist and playwright, Dea Hurston. The Dea Hurston New Village Arts Center will be the first arts center in the United States named for a Black woman in over 50 years and the only one on the West Coast. Opening events include a Ribbon Cutting Ceremony on Friday, January 27 and a community celebration and open house on Saturday, January 28. “The Ferryman” will be the first production to take place in the new arts center. The 21 member acting company of “The Ferryman” includes actors Tom Daugherty, Joy Yvonne Jones, The creative team includes Doug Cumming (scenery), Annelise Salazar (lighting), Jojo Siu (Costumes), Harper Justus (Sound), Alyssa Kane (Props), and Nathan Waits (Stage Manager). “The Ferryman” takes place in Armagh, 1981 during the heart of The Troubles. The Carney farmhouse in Northern Ireland is a hive of activity with preparations for the annual harvest. A day of hard work on the land and a traditional night of feasting and celebrations lie ahead. But this year they will be interrupted by a visitor. It is the winner of the 2019 Tony Award and universally acknowledged as one of the greatest plays of the modern era. The play won the Evening Standard Theatre Award and the Laurence Olivier Award for Best Play during its West End run and the New York Drama Critics’ Circle, Outer Critics Circle, and Drama Desk Awards for Best Play for its Broadway run.

Ben Brantley said in The New York Times, “An endlessly vibrant work, the real sustenance provided here comes from the sheer abundance within a work that picked up most of the awards on offer during its London run last year. This is theater as charged and cluttered and expansive as life itself. And the three and a quarter hours and 21 speaking parts required to tell its story — which is at once a shivery suspenser, a hearthside family portrait, a political tragedy and a journey across mythic seas — barely seem long enough to contain all it has to give us.”’ “It revels in the addictive power of artfully unfolded narratives. And I mean all kinds of narratives: classical epics and homey fairy tales, barroom ballads and chronicles of hopeless love, multigenerational family sagas and ghost stories with a body count. Yet, like a James Joyce short story in which the everyday and the eternal live cheek by jowl, “The Ferryman” seems to
sprawl over an entire, divided country … the story embraces a multitude of exuberantly full individual scenes, of a number and richness rarely seen outside of Shakespeare. By the end of this magnificent drama, Mr. Butterworth has connected the contradictions with a skill that takes the breath away.” 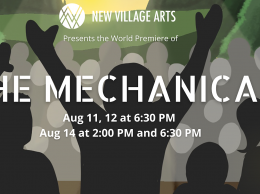