TR Robertson –Most everyone has had a holiday dinner filled with laughter, tension, arguments, ribbing, secrets and sharing. Using this as a starting premise, throw in a series of personal issues for a somewhat dysfunctional family and a New York apartment filled with strange noises and occurrences, you have the perfect set-up for a very funny, spooky and emotional dramedy. Award winning playwright Stephen Karam uses the traditional holiday of Thanksgiving in a Manhattan apartment in Chinatown, always a stressful time for many families, as the setting for the Blake family gathering. What starts out as a normal Thanksgiving celebration soon begins to unravel as the day wears on, even while members of the family try to hold things together with humor and emotion. 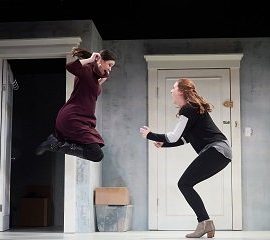 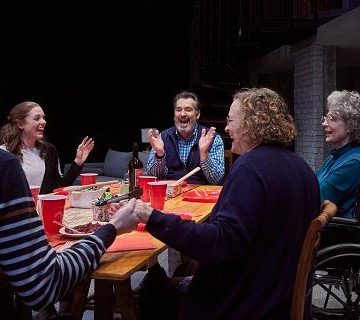 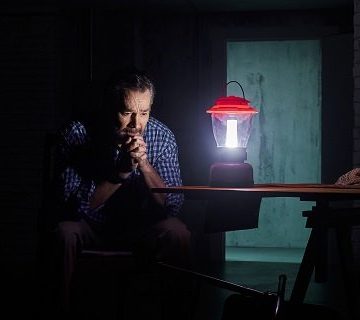 The Blake family arrives at the split-level duplex apartment of daughter Brigid and her boyfriend Richard. Erik and Deirdre, Brigid’s parents, arrive with Aimee, their older daughter, and Erik’s mother, Fiona but known as “Momo”. Momo is in a wheelchair and suffering from advanced stages of Alzheimer’s, at time lucid but most of the time mumbling statements like “You can never come back” and “Where do we go?”, statements which will become prophetic by the end of the play. Erik had worked for 28 years in the maintenance department of a school, is restless and sleep deprived, is having strange dreams and has recently gone through some life altering experiences. Wife Deirdre has worked for 40 years as an office manager in a dead end job and is having a difficult time in her relationship with Erik. Both Erik and Deirdre are having a difficult time with daughter Brigid’s apartment choice and they constantly make snide comments about what the apartment lacks. One of the most emotional moments in the play is Deirdre’s reading of an e mail Momo wrote to Aimee and Brigid before Alzheimer’s had taken over. Older daughter Aimee has gone through a recent break-up with her girl-friend, is a lawyer in a firm that has recently informed her she is no longer under consideration as a partner and she is suffering from a serious illness. Younger daughter Brigid works in a bar and is struggling to find work in her major field of interest and her older, excitable boy-friend has also been experiencing unusual dreams. As the family gathers for a traditional Thanksgiving meal, prepared by Richard, tension is in the air and things will begin to unravel as Deirdre keeps reminding Erik that he has something to tell his daughters. Along with this, loud booming sounds from upstairs continue, lights start to flicker, some lights will go out, haunting sounds are heard off and on and in the final 10 minutes of the play darkness will descend on one particular family member, both figuratively and in actuality.

Director Todd Salovey has selected a vibrant, veteran, and outstanding cast to portray the Blake Family and Richard. Playing Erik Blake is veteran actor Jeffrey Meek who has performed and directed numerous regional performances and teaches at the Los Angeles Film School. He presents Erik as a man with great inner conflict yet a man that loves his family deeply, “This is what matters right here” when referring to the family gathering. Playing wife Deirdre is Elizabeth Dennehy. Elizabeth has performed in both theatre, television and film as well as teaching Shakespeare at the Los Angeles County High School for the Arts. You get the feeling from the start that Deirdre is trying to hold things together while being torn apart inside. Elizabeth’s very emotional outburst toward the end of the play is just the tip of the iceberg in what mom and dad Blake are going through in their life.

Daughter Aimee is played by Amanda Sitton, a San Diego Theatre Critics Circle Craig Noel Award winner. Aimee is going through a range of emotions, brought on by physical and emotional pain. Amanda is a stand-out in showing this range. Her sharp, cutting, humorous comments bring laughs to tense situations. Younger daughter Brigid is played by Kate Rose Reynolds. Kate has played in numerous theatres around the country. She has recently returned to San Diego from living in New York City and San Francisco. She presents Brigid as a bit impetuous, somewhat flighty, perhaps a “Daddy’s girl” and pouty and a young lady who seems to try and always impress. Father Erik tries to calm her down after she throws a tantrum over being overlooked for a job by assuring her, “Pursuing your passion is your gift”. Boyfriend Richard is played by Brian Mackey. Brian portrays Richard is a person overlooked by the family, but someone who definitely wants to be included. He is trying to do his best to be accepted but does go over the top when he tells about the unusual dreams he has. Brian has performed in a number of regional performances and is a former Craig Noel Award winner for Actor of the Year in 2011. And then there’s Momo, played by Rosina Reynolds. Rosina has few speaking parts, mainly repeating phrases and occasional noises as she plays Momo, Erik’s mother who is suffering from the advanced stages of Alzheimer’s. She does shock the audience toward the end of the play as Momo, reacting to the rising tension and situations with the family, bursts out in a fit to screams.

This is an emotional play that might upset some people, reminding you of past holiday experiences, but it is the emotions of the play that make this play well worth seeing. It is not a tender play, but the humor is well placed to occasionally cut through the tensions. Playwright Karam said he refers to the play as a family thriller and this indeed is a good description of what you will see in this 90 minute play.

“The Humans”, presented by San Diego Repertory Theatre, is on stage at the Lyceum theatre in Horton Plaza, until February 2nd. Tickets are available at 619-544-1000 or go to www.sdrep.org. Next up for SD Rep is the swashbuckling adventure, “House of Joy”, beginning March 5th.

← PREVIOUS ARTICLE
Up Next at NVA: Murder for Two and Much More!