TR Robertson — There is no way a person could visit New York and not partake in the amazing selections of food choices that exist in this city. Those that are daring try some of the varieties of food offered by the colorful kiosks on most of the street corners. We considered sampling, at the very least, a hot dog, but decided not to on this trip. Instead, Carolyn had arranged for us to take a NYC Walking Food Tour covering a small portion of Manhattan. Another $45 limo-taxi drive toward the tip of Manhattan put us at Bleeker Street, centered between West Village, Greenwich Village, East Village and Soho. This area has some of the oldest parts of Manhattan, settled in the 1600’s. The streets run in a variety of directions and angles, all with apartment complexes sitting above markets, stores of every type and of course, restaurants. Most of the streets are lined with trees giving the area a quaint, quiet, and peaceful look. The majority of restaurants have outdoor eating areas that popped up during the COVID years.

Out destination for the start of the tour was to meet at the Porto Rico Importing Coffee & Tea shop. Arriving a little early, we went into this small coffee and tea house and shop and were amazed at the quantity and extent of coffee and tea products available. Bags and bags of beans, all labeled, filled the shop. The smells were incredible. A small counter in the back was available to order any style of coffee you desired. I ordered their cappuccino and must admit it was probably the best I have ever had. Wandering back outside, our guide, Jonathan Dauermann, from Sidewalk Food Tours, had arrived, as well as others, for the walking food tour of this area of Manhattan. 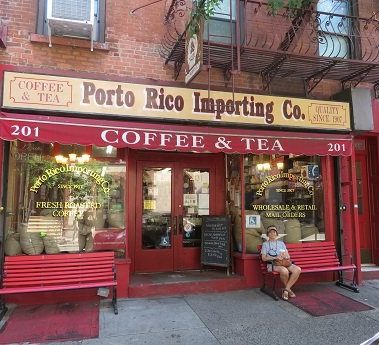 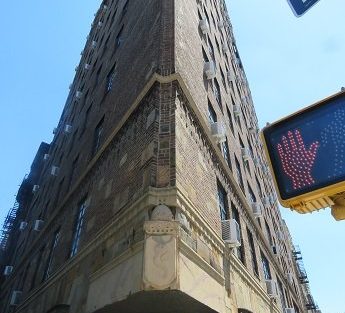 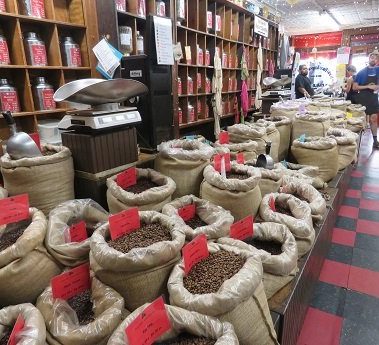 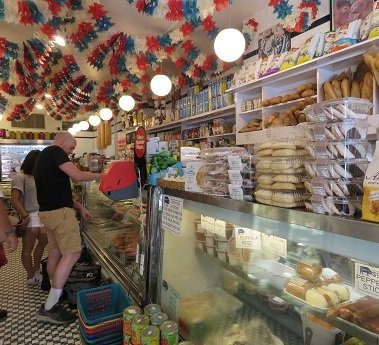 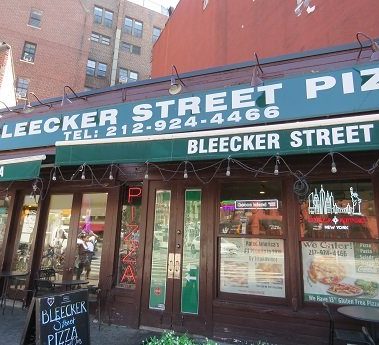 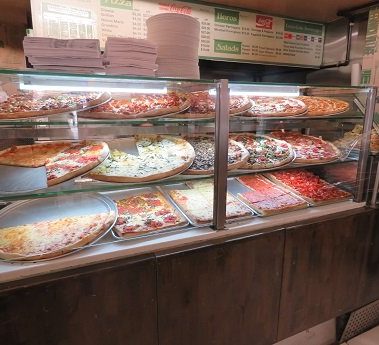 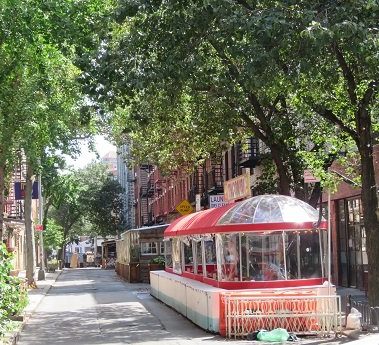 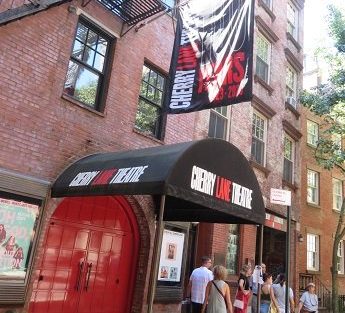 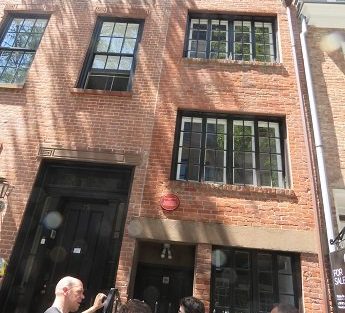 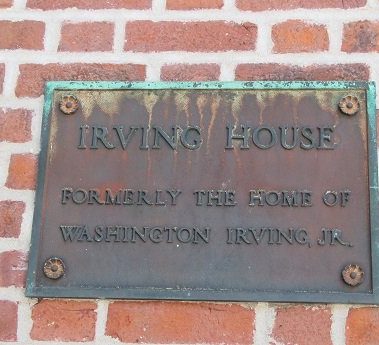 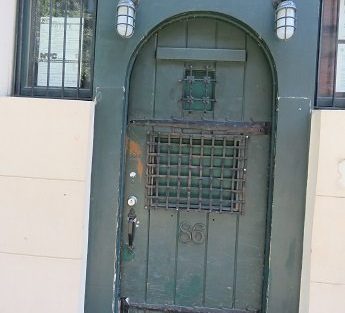 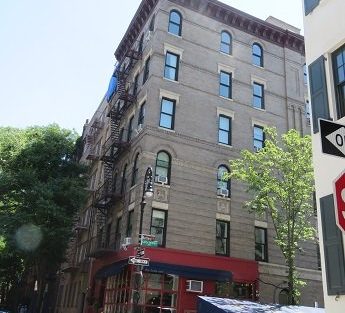 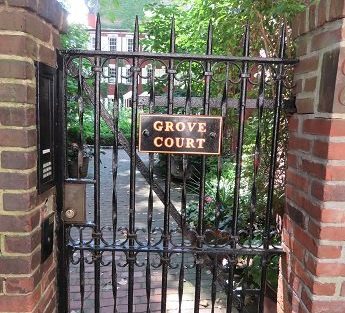 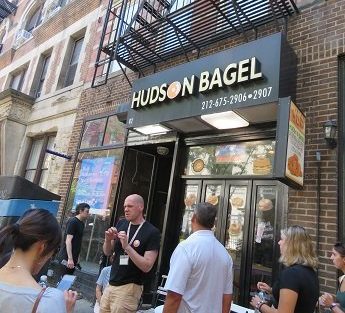 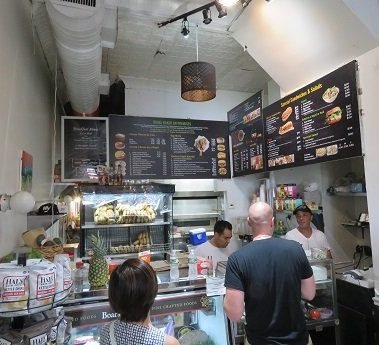 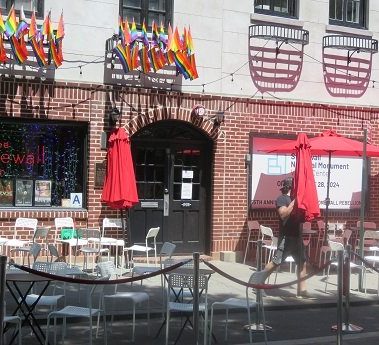 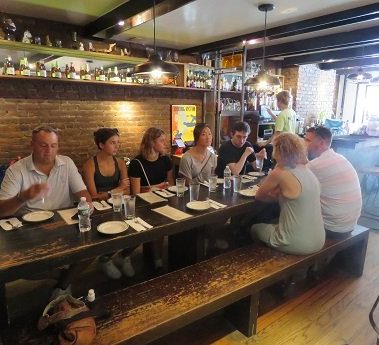 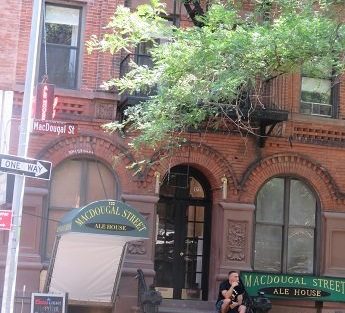 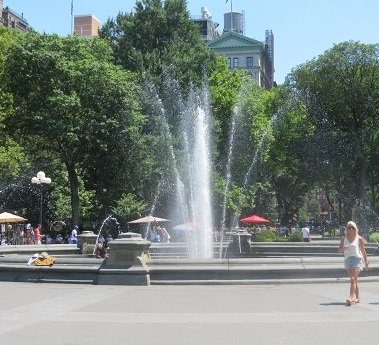 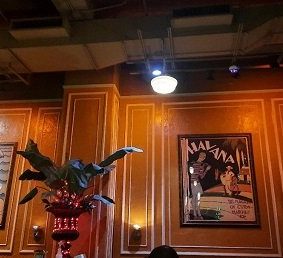 After a brief introduction to the area, pointing out that New York was named after the Englishman, the Duke of York and Greenwich is from a Dutch word meaning Green Place, we began our walk down the streets past numerous shops, parks, churches, and apartment buildings. Our first stop was at Faicco’s Italian Specialties butcher shop where we sampled delicious Italian meats and a deep-fried rice ball with dipping sauce that was to die for. The shop specializes in an array of sausages, meats, cheese, oils, sandwiches, and other dishes. We next moved a short distance down Bleeker Street to a pizza shop Jonathan said was his favorite, and I can see why. Most of the pizza shops in NYC offer large pizzas by the slice. At this location, Bleeker Street Pizza, once featured on the Food Network, the pizzas were on display in a large counter display. For our tasting pleasure we were given a large slice of Nonna Maria, resembling a Margarita pizza but cheesier and way more delicious. A large Nonna Maria ran around $27.00, and their pepperoni ran $28.00. Believe me well worth every bite.

From the pizza shop we crossed toward West Village into an area referred to as Cherry Lane. It was pointed out that the architecture in this area is protected by New York City laws and the exteriors of the buildings must remain as they currently stand. People like Washington Irving, Aaron Burr, Cary Grant, John Barrymore, and Edna St. Vincent Millay, to name a few, have lived in this area. One of the oldest residential homes still standing in Manhattan, dating back to 1799, is in this part of town. The brownstone homes are expensive, one we passed by that is for sale is a 990 square foot brownstone on the market for $4.5 million. Not far away is Cherry Lane Theatre, formerly a cigar factory. This is the oldest Off-Broadway Theatre in Manhattan. Walking by there was an ad for the latest play, Oh God, A Show About Abortion by Alison Leidy. Across the street Jonathan pointed out two identical brick homes, each on a corner of the block, built by a gentleman to separate his twin daughters who did not get along. Further down we glimpsed the gate that once opened to a “speakeasy,” called Chumley’s, existing during prohibition and around the corner was the door patrons would use to exit when there was a raid on the establishment. The number 86 was on the door, hence the term, “to be 86ed”, or cut off from drinking. A short walk away, on the corner of Grove St. and Bedford St. we saw the apartment building that was used in the popular T.V. show, “Friends,” when the apartment building was shown where Monica, Rachael, Joey, and Chandler lived. We also peaked through a metal gate into a courtyard where pricy one- and two-bedroom apartments exist, some averaging over $6,000 a month for a one-bedroom apartment. Before we arrived at our next food stop, Jonathan pointed out the former home of Otto Cohn who had built a home for aspiring artistic women to live only to find out that they brought a bit of trouble when dealing with them and he decided his idea was not the best. Otto is said to be the inspiration for the gentleman cartoonish figure on the Monopoly game box.

The third food stop was at stop at Hudson Bagel for tasty New York City bagels. Our guide said the secret was New York City water. We sampled pieces of regular bagels and bagels with everything, slathered with cream cheese. After finishing our bagels our group continued walking through the area, crossing over to walk by Washington Square Park. Across the street a famous spot was pointed out, The Stonewall Inn, made famous June 28-29, 1969, when a fight broke out in the club, a favorite spot for the LGBT community, and a clash with the police department led to the start of the LGBT Rights Movement. The Washington Square Park is the starting point for the Gay Pride Parade and the huge Halloween Parade each year, both with over 20,000 participants. One interesting, moderately gruesome fact is the there is an estimated 25,000 people buried under the concrete walkways and grounds of the park dating back to the early 1700’s. The famous arch across from the large fountain was built in 1889 by Stanford White.

Moving through the park we headed to our next food sampling, Thai food. Our destination was Thai Galanga, where we had shrimp dumplings and corn fritter pieces and sweet sauce. On the wall was a picture of the owners with Bobby Flay, a famous chef and a resident of New York City, who had eaten at the restaurant. The fifth food stop would be outside of the well-known Café Wha, significant in the early years of the 60’s when personalities like Jimi Hendrix and Bob Dylan performed early in their careers. The food we sampled were falafels from Mamoun’s on MacDougal Street. They are home to what is advertised as the most famous falafel in all of New York City. You can google the restaurant and you will find a YouTube video of the recipe for the falafel.

The final stop for the food tour was at Molly’s Cupcakes, winners of the first Cupcake Wars program on the Food Network. Molly’s Cupcakes began in Chicago and has stores in Iowa, New York City and Cincinnati. They have been referred to at one of the top ten cupcake business in the nation. We here in Vista might also argue that our Vista Little Cupcake Kitchen, winner of two Cupcake War programs, would have to be considered as in the top 5 for best Cupcake in the nation. I will admit, I tried a Salted Butterscotch Carmel Cupcake, and it was delicious. Carolyn had a Boston Cream she said was also particularly good. We ended back at our starting point of Porto Rico Importing where we would be taken back to our hotel by an arranged ride.

Day 3 of our NYC Adventure ended with dinner at the busy Havana Central Restaurant and Rum Bar where we dined on a Cuban Sample Platter. It was interesting and we both said we wished we had ordered a Cuban Panini instead. I also tried a Hathey Cuban beer and Carolyn went with the Havana Hurricane. Overall, an enjoyable day with lots of different and very traditional examples of food choices for a visit to New York City. Next up, Day 4 in NYC for a COVID Test for our cruise and a visit to the NYC American Museum of Natural History and Day 5 with a long bus tour of Manhattan

NEXT ARTICLE →
SVC Update: Are You a Member Of South Vista Communities?

Fun Facts and Trivia About the U.S. Presidents – Part II

What is Your Favorite Sandwich? – TR Robertson 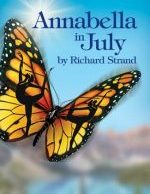