From creating a shared brewhouse to experimenting with the new flavors of now and the next decade, Vista breweries are on the cutting edge of brewing.

“Brewing is not a craft that you hone quickly,” said Nick Corona, owner of Five Suits Brewing in Vista. “Even one batch of beer takes months just to finally test a finished product.”

Fortunately for Corona, it didn’t take long to become a pro. He got his start in homebrewing in 2012. Four years later in 2016, he won the National Home Brewer of the Year. Three years after that, he and his wife opened the doors of their location in Vista, Five Suits Brewery, named after their family and their history in the casino industry.

After winning hundreds of medals at competitions, Corona put his sights on a new brew with new ingredients.

“Up until then, I had never brewed a hazy IPA. Then we came up with our Planet Nectaron,” said Corona. “I came across the nectaron hop, a very new hop out of New Zealand.”

The new brew was met with new success.

“The nectaron put us on the map as far as San Diego is concerned. The first year we were in business, it was voted as the #1 hazy IPA in San Diego by the readers of the San Diego Beer News publication.”

Five Suits isn’t the only brewery in Vista working with New Zealand hops. Not far down the road is Pure Project that is working together with NZ Hops Ltd. on the Bract Brewing Programme, an effort to select and develop new hop varietals over the next decade.

“It takes anywhere from 10 to 20 years to develop a new hop that has all of the desirable traits and flavor profiles,” said Makenna Barris, director of marketing for Pure Project. “People started creating the hops we are drinking and enjoying now a decade ago. We’re humbled and honored to participate.”

Pure Project was one of 20 U.S. breweries selected to participate in the Bract Brewing Programme. Pure Project will brew a series of murky pale ales over the next year using these experimental new hops. To create the fairest comparison, each murky pale ale in the series will be brewed using the same process and ingredients, but with a different hop varietal. Pure Project will release new versions of the brew approximately every six weeks.

“It’ll be available at every taproom, and each taproom will have a QR code specific to that beer and hop where you can scan the code and rate the beer,” said Barris.

“NZ Hops ships their hops via ocean freight, which is widely considered to be the most energy efficient form of commercial transportation. Even though their product comes from New Zealand, it is more efficient than trucking,” said Barris.

Booze Brothers Brewing Co. is also looking at new ways to minimize their carbon footprint. They’ve partnered with breweries around the county to participate in the PakTech to Pavement program as a drop-off location for used PakTech, which you might recognize as the plastic toppers holding your four-pack together.

“A lot of products that get used in brewing go to landfills or incinerators. There’s a lot of innovation in the San Diego Brewers Guild trying to recycle and reuse more,” said Donny Firth, co-owner of Booze Brothers Brewing Co.

Created by the San Diego Brewcycling Collaborative, the PakTech to Pavement recycling program collects PakTech from various drop-off locations and sends it to MacRebur Southern California, who takes the pieces to create a fossil fuel alternative for asphalt companies to use for their projects.

In addition to participating in this program, Booze Brothers has developed a method of making all of their beers gluten-reduced.

“My brother’s wife has celiac, so she was asking us if there’s a way to get rid of the gluten in beer or make gluten-reduced beer,” said Firth. “We came across a product called Clarex that breaks up gluten. In testing, it brought gluten levels down below 20 parts per million. People have tried it, and they can drink it unless they’re extremely sensitive.

“We can’t call it gluten-free because it has the base ingredients, even though the gluten has been broken up. Some people are sensitive to those base components,” continued Firth.

Booze Brothers adds Clarex’s beta-glucanase enzyme during the fermentation process. The enzyme mixes with the brew and breaks down the gluten contained in the barley. The result: a delicious barley beer below the 20 parts per million threshold.

While many individual breweries are innovating the ways they brew, one spot has changed the way multiple brewers can brew under the same roof.

CoLab Public House recently opened and is home to three beer breweries, one winery and one burger restaurant.

“If we’re going to do this, let’s make it a comfortable place for people to be and a place where we would like to be ourselves,” said Joe Deutsch, co-founder of CoLab Public House.

The brewhouse is a necessary component to the brewing process, but it’s also the most expensive piece of equipment to purchase and sits idle for the majority of time. CoLab addressed these hurdles in small scale brewing by opening a space where multiple breweries can take advantage of one shared brewhouse and tasting room.

“Each tenant has their own production unit, fermenters, cold boxes and empty kegs. We have a shared brewhouse that everyone can use. In a typical craft brewery, the brewhouse is idle 80% of the time,” said Deutsch. “By sharing the brewhouse among two or three brewers, there’s plenty of time available to brew, and they only have to pay a fraction of the cost.”

“Everyone can find something they want and love,” continued Deutsch. “We’re the same concept as a food hall, but instead we’re an alco-hall.”

The City of Vista continues to be a place where brewers of all sizes can innovate. For more information about doing business in Vista, please visit the City’s Economic Development website.

← PREVIOUS ARTICLE
The 9th Annual Rising Star of the Month Program is Here! 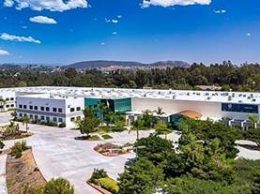