As members and guests went through the check-in process those in attendance had a chance to renew acquaintances and make new ones prior to the beginning of the Hall of Fame induction. MC Tom Robertson, reporter, introduced Historical Society President Eleanor Hutchins, TheVistaPress.com owner, who welcomed those in attendance and led the audience in the Pledge of Allegiance. Society Treasurer Terry Moxley led the group in an Invocation followed by a luncheon served by Shadowridge Country Club. Vista Mayor Judy Ritter introduced Jack and Sharon Larimer and read a proclamation thanking them for their long service and work with the Vista Historical Society and the importance of their efforts in keeping the history of Vista vibrant with the Vista Historical Society Museum. President Eleanor Hutchins also gave a State of the Historical Society listing the numerous accomplishments the organization had accomplished since last year. 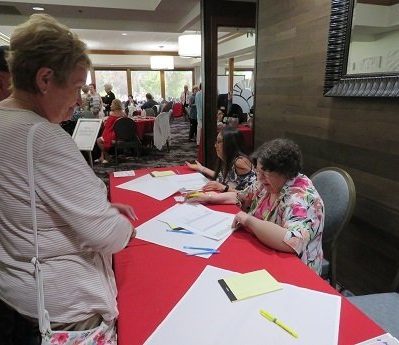 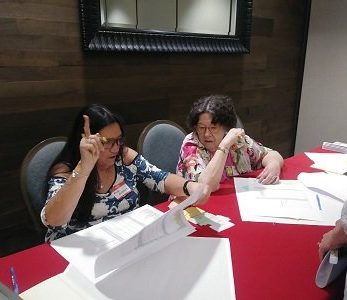 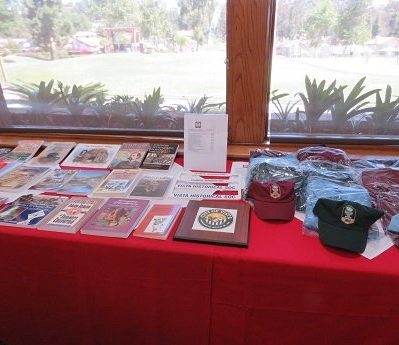 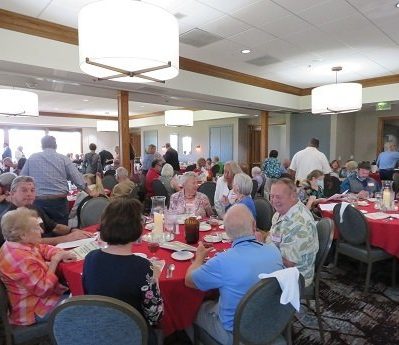 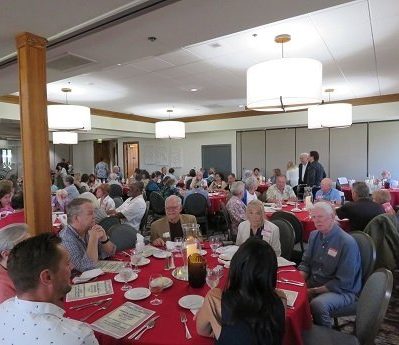 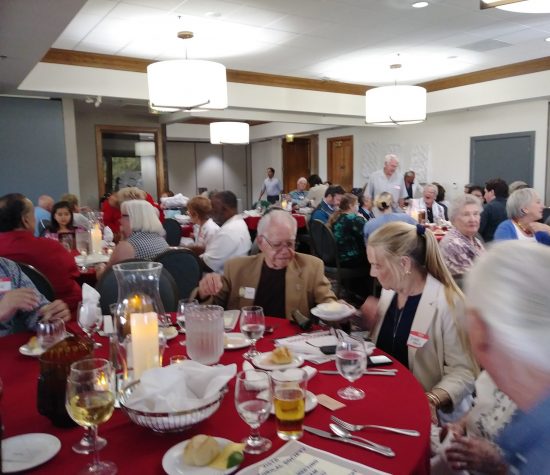 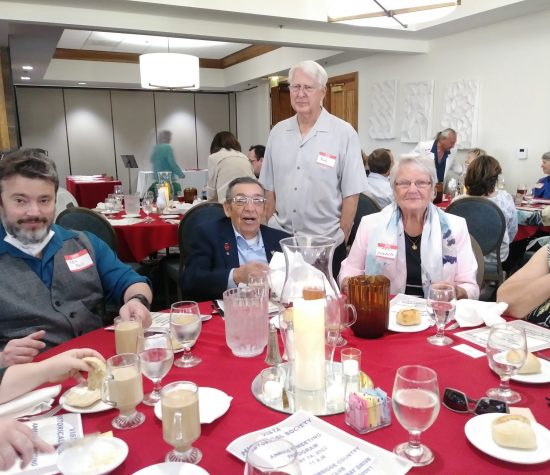 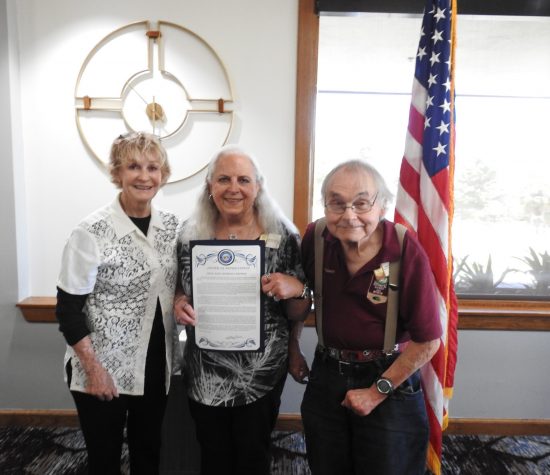 At the end of the luncheon, the introduction of the new Hall of Fame members began. Each new selectee was introduced by a special friend chosen by the Hall of Famer, where information was shared about the newest addition to the Vista Historical Society Hall of Fame. The new inductee was also given a chance to speak about their selection. 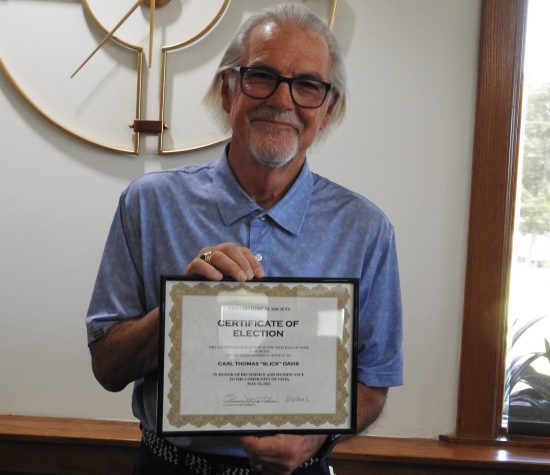 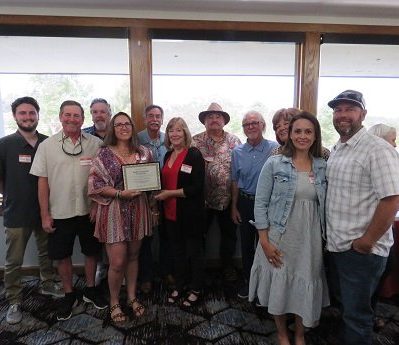 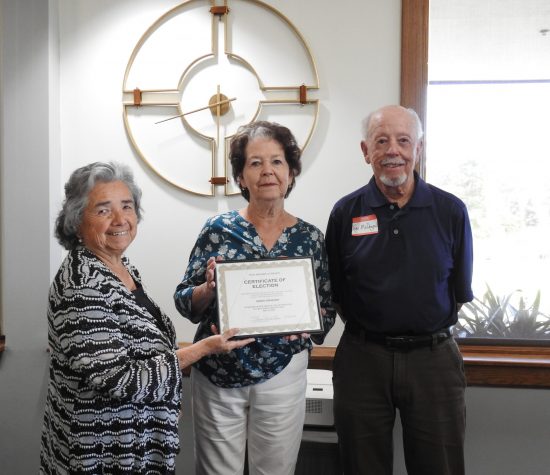 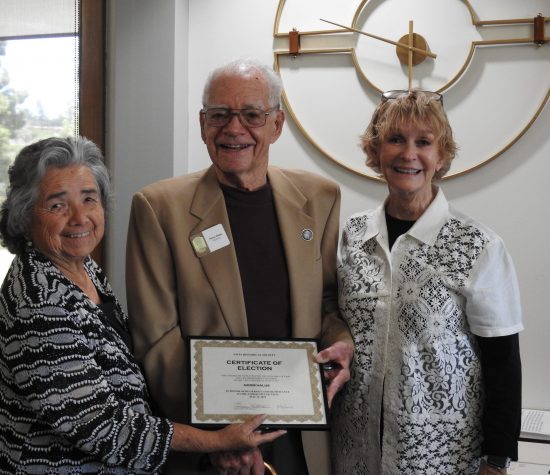 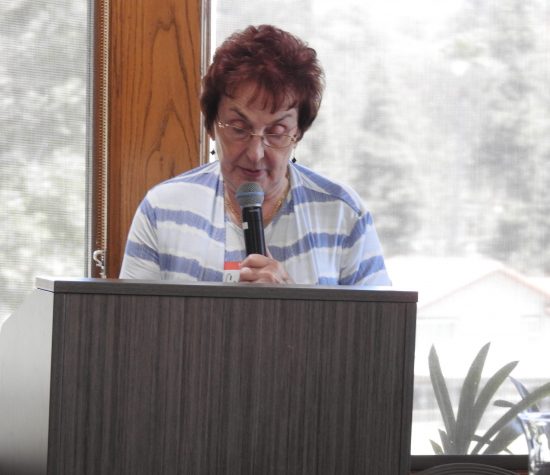 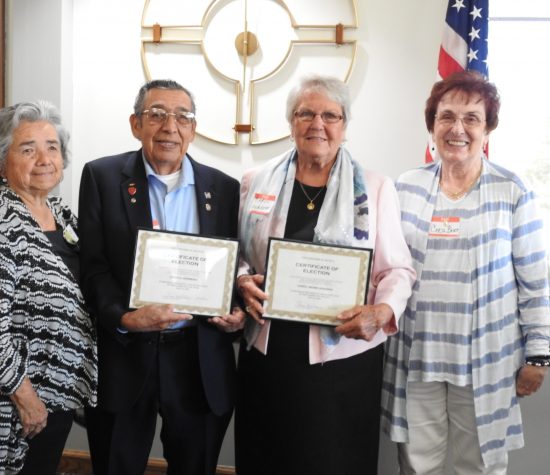 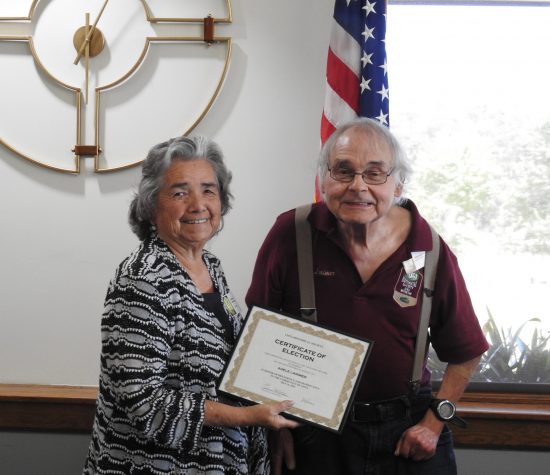 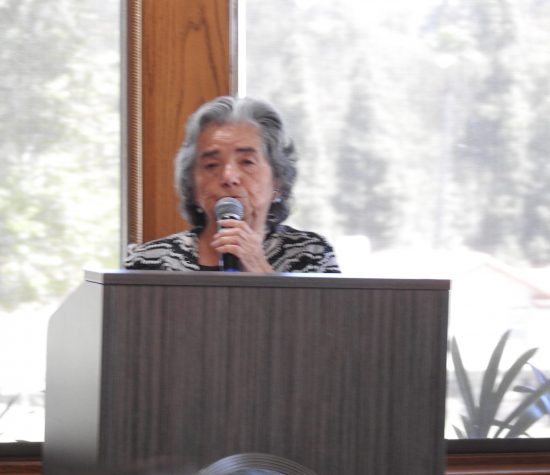 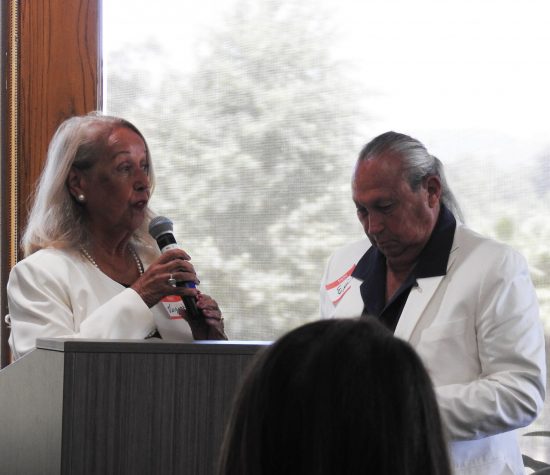 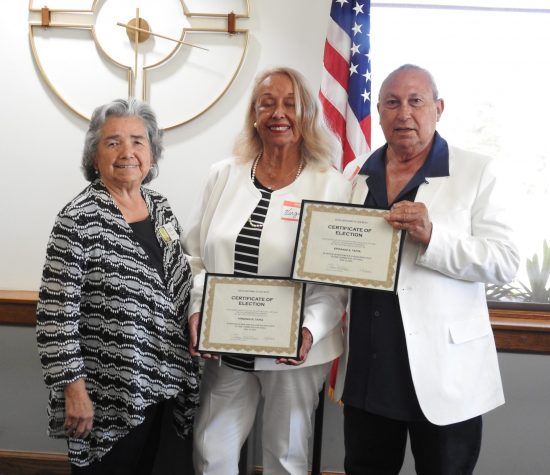 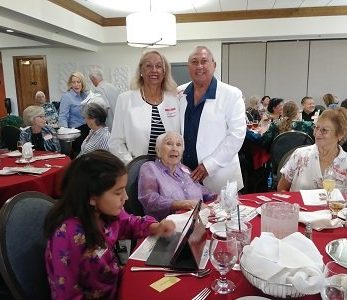 The first person introduced was Doug Gudmundson, a close friend of Hall of Famer Carl Thomas “Slick” Davis. “Slick” was being posthumously added to the Hall of Fame. He was a long-time resident of Vista attending elementary, junior high and high school in Vista. He held numerous records at one time for Vista High School in basketball and fast pitch softball in the 1940’s. “Slick” was a Korean War veteran, founding member of the Vista Pony League and Vista National Little League. He co-owned a number of liquor stores in Vista, Oceanside, and Mira Mesa. He formed the Vista Bombers Fast-Pitch Softball team that played throughout the U.S. and in 1983 one of the ball fields at Breeze Hill Park was named “Slick” Davis Field.

The second Hall of Fame selectee was introduced by Tom McDougall, brother of new Hall of Famer Sandi Graham. Sandi was born in Oceanside in a hospital before Tri-City Medical Center existed. Growing up she worked in McDougall’s Pharmacy in Vista, owned by her family. She worked for Vista Unified School District, retiring as an Administrative Assistant working at the California Avenue School, a school for handicapped children. During retirement Sandi has volunteered for numerous organizations like the PEO Chapter, the Triple M Club (raising money for high school scholarships), Moonlight Amphitheatre as a Moonlight Angel, and 28 years with the Vista Historical Society serving for 18 years as the Membership Chairman. Sandi said volunteering is a big part of her life and she loves to help where she can.

Vista Mayor Judy Ritter introduced the third Hall of Fame selectee. Mayor Ritter spoke about the long service of Norm Halus in the City of Vista. Norm is another individual who has made volunteering a large part of his life. He was especially integral in his work with Vista parks, senior and community groups. He has worked on his homeowner’s association, on the Scripps Community Advisory Board, on the Traffic Commission, the Planning Commission, Parks & Recreation Commission, Sales Tax Oversight Committee and more. He recently served on the McClellan Senior Center’s Nutrition Committee and helps shuttle seniors who need assistance. His love of family and community makes Norm an asset to the community.

Carol Brady spoke about the next Hall of Famers, a couple, John and Carol Herrera. These two individuals have given a lifetime of service and volunteerism to Vista. John is a Marine veteran and after leaving the Navy he worked at a number of agencies like the Internal Revenue Service, U.S. Customs Service and Mira Costa College’s Adult Education Program. His community volunteer services has led him to work with the National League of United Latin American Citizens, Hispanic Americans for Progress, President of the Shadowridge Rotary Club, working with the Sheriff’s Department as a liaison for the Latino community, member of the GI Forum, Veterans of Foreign Wars, Disabled American Veterans and has received numerous awards for his work with Latino youth groups. His wife Carol has taught elementary school in private and public schools, gifted and talented programs, and college as well as being an elementary school principal in Carlsbad for 16 years. She has also served as a Vista Unified School District Board of Trustees member for 16 years. Carol has also served as a board member of Solutions for Change, the Assistance League, Tri-City Hospital Advisory Board and a founding member of the Vista Education Foundation and a recipient of their lifetime Achievement Award. She is a Sunrise Vista Kiwanis member, helped start a reading program for the Vista Boys and Girls Club and continues to volunteer and assist wherever needed. This is a power couple of voluntarisms.

The next Hall of Famer for the Historical Society was posthumously introduced by her son Jack Larimer. Adele Larimer was born in 1915 and moved to Vista in 1940. She and her husband Richard moved back to Chicago during WW II, returning to Vista after the war. Adele worked various jobs to help the family and served as a Cub Scout den mother in the 1950’s. She worked for Vista Unified School District at Lincoln Junior High School first in the cafeteria. She joined the Palomar Riders and volunteered to help work at various events. Adele would later work as the principal’s secretary at Lincoln Junior High until she retired in 1980. In the 1960’s she started volunteering for the Tri-City auxiliary known as pink Ladies first as a receptionist, later in the emergency room, volunteering for over 40 years. Adele also volunteered in the office of the Community Church of Vista and as a docent for the Vista Historical Museum. She would drive friends to appointments who were not able to drive themselves. Adele passed away at age 85 in 2000.

Jack Larimer also introduced the next Hall of Fame member Dr. John Stadden. Dr. Stadden is also being posthumously inducted. Dr. Stadden was a physician and surgeon in Nebraska before moving to Vista in 1931 to resume his practice. He was active in the community in several capacities including as a member of The Vista Masonic Lodge #687 and was the charter president of the Vista Rotary in 1937. Dr. Stadden remained active in the community until his passing in 1961.

The final Vista Historical Society Hall of Fame members inducted was another couple, Epi Tapia and Virginia Tapia. Epi and Virginia are long time Vista residents and business owners. Virginia has lived in Vista all her life and Epi moved here in 1953. Both are Vista High School alumni and they have been married 55 years. They currently own The Epi Centre Hair Studio and have previously owned parlors in San Marcos and Oceanside. Both were active members of the San Diego County Cosmetology Association. Epi was the manager of the May Company Styling Salon in Carlsbad when the El Camino Shopping Center opened. They are members of the Friends of Vista Library and supporters of the Avo Playhouse and Moonlight Amphitheatre. Virginia served as Executive of the Vista Chamber of Commerce for 10 years and served on the Vista Economic Development Association, the North County Tourism Coalition, the North County Transportation Coalition, and the North County Chamber of Commerce Association. She was named Vista Woman of the Year by the local press and Woman of Accomplishment by Soroptimist International of San Diego. She is also a past member of Kiwanis International of Vista and The Vista Community Clinic. Epi served on the City’s Specific Plan 26 Committee, a board member of the Vista Town Center Association, chairperson of the City of Vista Cinco de Mayo Celebration and the Vista Chili Cook-Off. He has also served on the board of the Boys and Girls Club of Vista and was on the advisory committee for the purchase of the Rancho Buena Vista Adobe. Epi and Virginia remain active community members and supporters of everything Vista. Epi recently wrote a cookbook using recipes he was gifted by many of the patrons to his hair studio.

The final part of the Hall of Fame recognition ceremony was the election of two members to the Historical Society Board of Directors. Sandi Graham and Carol Herrera were unanimously elected.

Next on the agenda for the Society include the Ice Cream Social on Saturday, July 23rd at the Vista Historical Museum and the Barbeque at the Museum on Saturday, September 24 and the Annual Christmas Party with Santa. 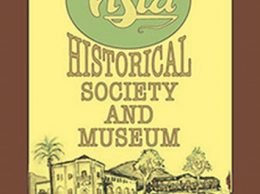 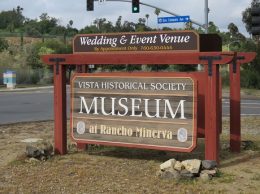 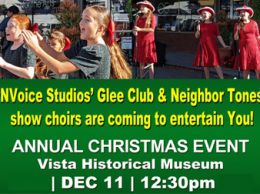 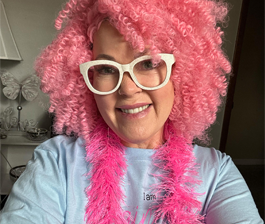